Just like that, we’re down to the final four teams of the NFL season: Championship Round. The Cincinnati Bengals are traveling to Arrowhead Stadium to play the Kansas City Chiefs. The San Francisco 49ers are headed to Lincoln Financial Field to play the Philadelphia Eagles. In many ways, someone could have looked at the conclusion of the regular season and picked these four teams as the most likely participants.

If you look at Expected Points Added (EPA) for the four Conference Championship teams, you’ll find quite a bit in common. The Bengals have the worst EPA (offensively) of the four teams, at fifth in the NFL. The Chiefs rank first. The Eagles rank third. The 49ers rank fourth. Defensively, it’s more of the same. The 49ers have the best EPA (defensively) at first in the NFL. The Eagles are fourth. The Bengals are ninth. The Chiefs are middle of the pack at fifteenth, likely offset by their first overall offensive EPA.

The numbers are pretty easy to understand in this regard – in order to make a run to the Super Bowl, you need a top-ten offense and a top-ten defense unless your team employs Patrick Mahomes at quarterback.

That’s not to say that two of these three teams aren’t also buoyed by excellent quarterback play. The Bengals (Joe Burrow) and Eagles (Jalen Hurts) are able to run the offenses that they do in large part because of their superb quarterbacks.

The 49ers are a unique case study – with a rookie seventh-round pick at quarterback, they’ve managed to excel by asking him to play clean football with minimal mistakes. Brock Purdy accomplished that in the regular season and has continued to do so in the postseason. He’s thrown for over 500 yards, with a 62.5% completion percentage, 3 passing touchdowns, and no interceptions in the playoffs. With a dominant defense and weapons galore on offense, if Purdy plays mistake-free ball, the 49ers are a tough out.

Heading into my predictions for this week, we went 5-3 in the divisional round, bringing my yearlong record to 110-66-2. As always, if you’re using my tips, please let us know!

These NFC Goliaths haven’t faced off this season, but don’t get it twisted. These are the two best teams in the AFC and have been for quite some time. The Eagles are coming off a dominant shellacking of the New York Giants in the divisional round, where the 49ers squeaked by the Dallas Cowboys. 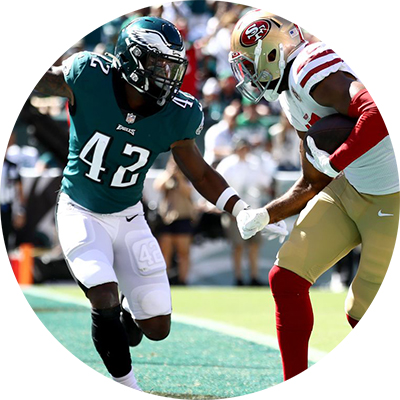 Both teams, as mentioned above, sport top-five offenses by EPA as well as top-five defenses. The challenge for the 49ers will come in the form of a rookie QB starting a high-stakes playoff game in Philadelphia. Their fans are guaranteed to be raucous, and while Purdy has been up to the challenge so far, this game will be a different beast.

The key for the Eagles will be going up big early, minimizing the damage that can be done by the 49ers’ potent rushing attack, and forcing Brock Purdy to throw more than usual. On the flip side, if the 49ers can keep the game close, they can lean on a three-pronged rushing attack featuring Christian McCaffrey, Elijah Mitchell, and Deebo Samuel. The Eagles have a strong defense, but the run defense isn’t exactly their strong suit.

The way that Joe Burrow outplayed Josh Allen in the divisional round might be Burrow’s statement that he’s a serious contender for the best quarterback in all of football. I still don’t think that he’s quite as good as healthy Mahomes, but he’s the real deal. 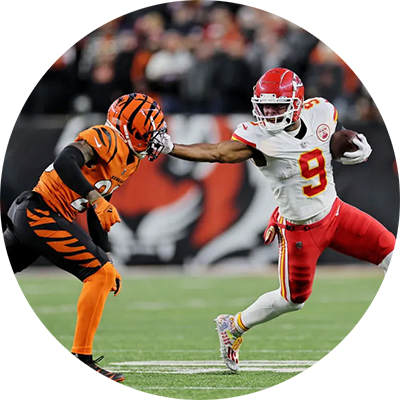 This is a battle of the two teams who have represented the AFC in the last three Super Bowls. A win by either team could very well announce to the NFL that they’re a dynasty in the making. The Chiefs, however, have lost three straight to the Bengals, including a heartbreaker in last year’s AFC Championship game.

The Chiefs are overdue for a transcendent Mahomes performance, but that high ankle sprain looms large in my mind. That kind of injury has hindered even superstar players like Mahomes before. I think that it will do so again in this matchup.

I’m taking the Bengals +1.5, and I’ll also take the over (O47.5) as well. The Chiefs’ middling defense means we’ll have to see some Mahomes magic to keep this game close.

All bettors need to be over 21 years old in a state where legal betting is allowed. Before placing any bets, I encourage our readers to explore the responsible gambling tools available on each site. Plan your betting budget, and don’t play for more than you can afford on entertainment. Setting a betting, session, or loss limit should be done in a preventative matter. Winning can never be guaranteed. If you feel that your betting is getting out of control, don’t hesitate to chat with or call the National Problem Gambling Helpline. The helpline is available for free 24/7. You can also educate yourself on Responsible Gambling here.

You can easily bet on NFL on these sites: Borgata, Unibet, BetRivers, BetMGM, Caesars, and FanDuel.

Every week you can check sport betting tips written by Jake Moszkowski here, on OnlineGamblers.com. He is an expert in NFL and other sports.

At the beginning of the week, Jake Moszkowski posts his predictions for the current week’s games. This includes speculations about players’ performance, game outcomes, and additional comments. After reading his articles you should be more aware of the possible wins and losses in NFL.

Online sports betting is on the rise and more and more states are opening up for this type of entertainment. New York, New Jersey, West Virginia, Pennsylvania, and Illinois State already have a number of licensed online sportsbooks accepting wagers on NFL games fully legally.

When you bet over/under, you don’t care about who wins – you only care about the number of points scored in the game.

You can browse draft odds by selection number, round specials, draft position, team picks, and more. All you have to do is find the best betting opportunities and place your bet online.

The NFL’s gambling policy strictly prohibits NFL Personnel from betting on “any NFL game, practice or another event,” in any capacity, which includes bets on “game outcome, statistics, score, the performance of any individual participant, or any other kind of ‘proposition bet’ on which wagering is offered.”